It’s time to recover the “maglia nera” jersey, the one that identified the last classified of Giro d’Italia between 1946 and 1951. 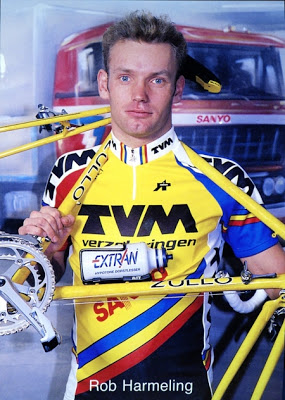 At the time this merit had, apart from a cash prize, quite a social prestige among cyclists. The wiliness of some to classify last made them hide in bars and farms in order to lose time.”

Many fans still remember the name of the last classified in 1951, younger ones had to seek in the archives, but they all recognize the name Giovanni Pinarello: an unknown at that time, but todays world-renowned cyclist. The following year he would be fired from his team (maybe for this?). The compensation money was the origin of the Pinarello bicycle factory.

The gregarious who work day after day to help their leaders deserve much more recognition, especially in the 3 major races (Tour de France, Giro d’Italia and Vuelta a España). Sometimes ending last is not voluntary, it can be the result of an injury, a fall, or just because at certain age you are still learning to compete in three-week races.

It may seem like a misunderstanding, and maybe even not ethical to compete to finish last, but the sport is full of doubtful acts and nobody seems to be concerned. You just need to remember those soccer games where the tie is agreed. Some regular season games, in any team sport, are lost on purpose in order to play against a weaker team during the play offs, or strangest results that they seem tailor made for bets.

To finish last you do not need to be the strongest, but you do need to know your limitations and pedal very intelligently so not to finish outside the time limit and become eliminated.

Historic runners like Jacky Durand, Jimmy Casper, Joseba Beloki, Rob Harmeling, Bradley Mcgee and Robbie McEwen have ended last in some classifications, which is unknown to most people.

Previous postCulture, tradition, territory. The Penedès. Barcelona.
Next postFrom hollywood to the Penedès – Discovering Jean Leon
We use our own and third-party cookies to perform usage analysis and measurement of our website to improve our services. If you continue on our website, we consider that you accept its use. You can change the settings or get more information here.